We Buy Houses in Spring Valley

House prices in Spring Valley have risen over the years. But representation in the county commission grows non-existent. Residents, especially old-timers, complain about the blatant mismanagement of the town’s affairs.

Yet the Spring Valley market remains highly competitive. Move-in ready homes can sell 4 percent above the listing price, with multiple offers in less than 10 days.

We buy houses in any condition within 1-2 weeks and pay 100% cash. In other words, we buy houses with structural damage and troublesome tenants and help distressed owners with quick cash.

We Are The Cash Buyers You Can Trust in Spring Valley

It could take months or over a year to sell such property on the multiple listing service (MLS).

What if you could avoid the stress, lowballing, and long wait?

With Nevada Cash Offer, you can sell your house within 7 days to 3 weeks in Spring Valley. And we pay 100% cash, so the offer is guaranteed not to fall through. No lender worries.

What’s more, you can sell your house in any condition without contingencies. But we compensate with a reasonable offer that covers the cost of repairs.

When you accept our cash offer, our team of experts will visit your property to assess the situation. This way, we can come up with a fair cash offer. Soon after, we can close the deal with a local title company.

And that’s how we buy your house in any condition and without conditions.

We Buy Houses in any Condition

It could take months or over a year to sell such property on the multiple listing service (MLS).

What if you could avoid the stress, lowballing, and long wait?

With Nevada Cash Offer, you can sell your house within 7 days to 3 weeks in Spring Valley. And we pay 100% cash, so the offer is guaranteed not to fall through. No lender worries.

What’s more, you can sell your house in any condition without contingencies. But we compensate with a reasonable offer that covers the cost of repairs.

When you accept our cash offer, our team of experts will visit your property to assess the situation. This way, we can come up with a fair cash offer. Soon after, we can close the deal with a local title company.

And that’s how we buy your house in any condition and without conditions.

Selling your Spring Valley house in two weeks is possible. But the process also depends on you contacting us and preparing title documents early on.

Once you contact us, we can get in touch within 24 hours to discuss your options. If you agree to sell your Spring Valley house to us, we’ll come in for an inspection.

Again, your readiness and availability dictate our work pace to get cash in your hands. Then, we’ll set an appointment date to visit your property with our contractors. The evaluation covers the cost of repairs and the labor cost in your area.

This exercise is not set in stone. It only gives us a rough estimate of what to offer. So we make room to cover our risks in the offer — all within 1 week.

After careful consideration, we’ll send you a fair cash offer. If you accept, we’ll hire a local title company to handle the transfer of deed and title documents and address any issues. If all goes well, the entire process takes less than 14 days. 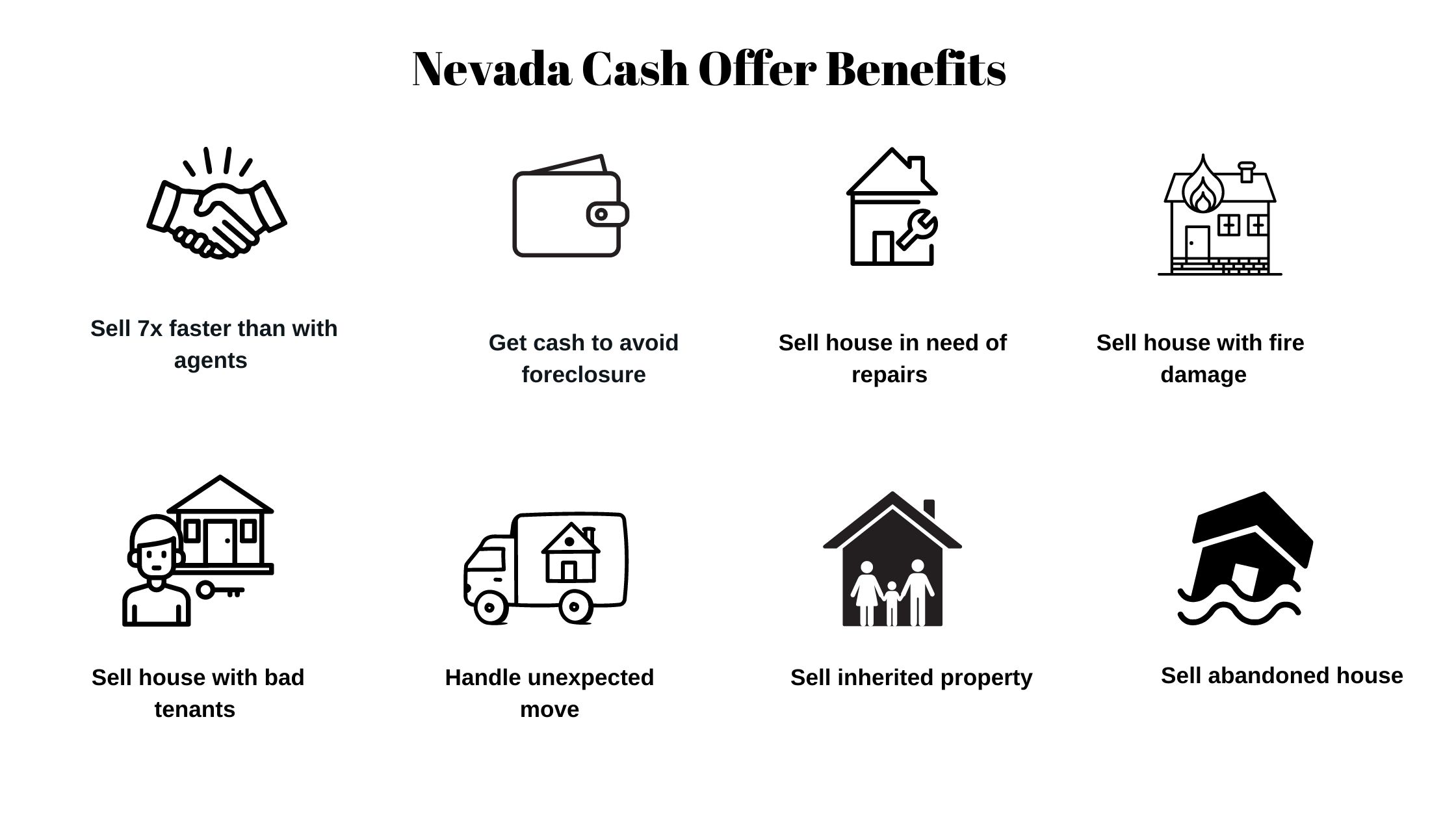 Trying to sell a house with minor or major issues fast? We can buy your Spring Valley house within 1-3 weeks without an inspection contingency.

Sell a house with damages, dirt, or trashy belongings still inside. We even buy hoarder houses.

Our cash offer stands the same from the point of offer to the sale’s closing. We don’t deal with mortgage lenders or have to sell before paying you.

Escape the exuberant agent commissions you’d have paid even if they sold your property below market value. We don’t charge any fees on our cash offers.

We don’t sell your contract to the highest bidder or back at the last minute. With Nevada Cash Offer, what you see is what you get. 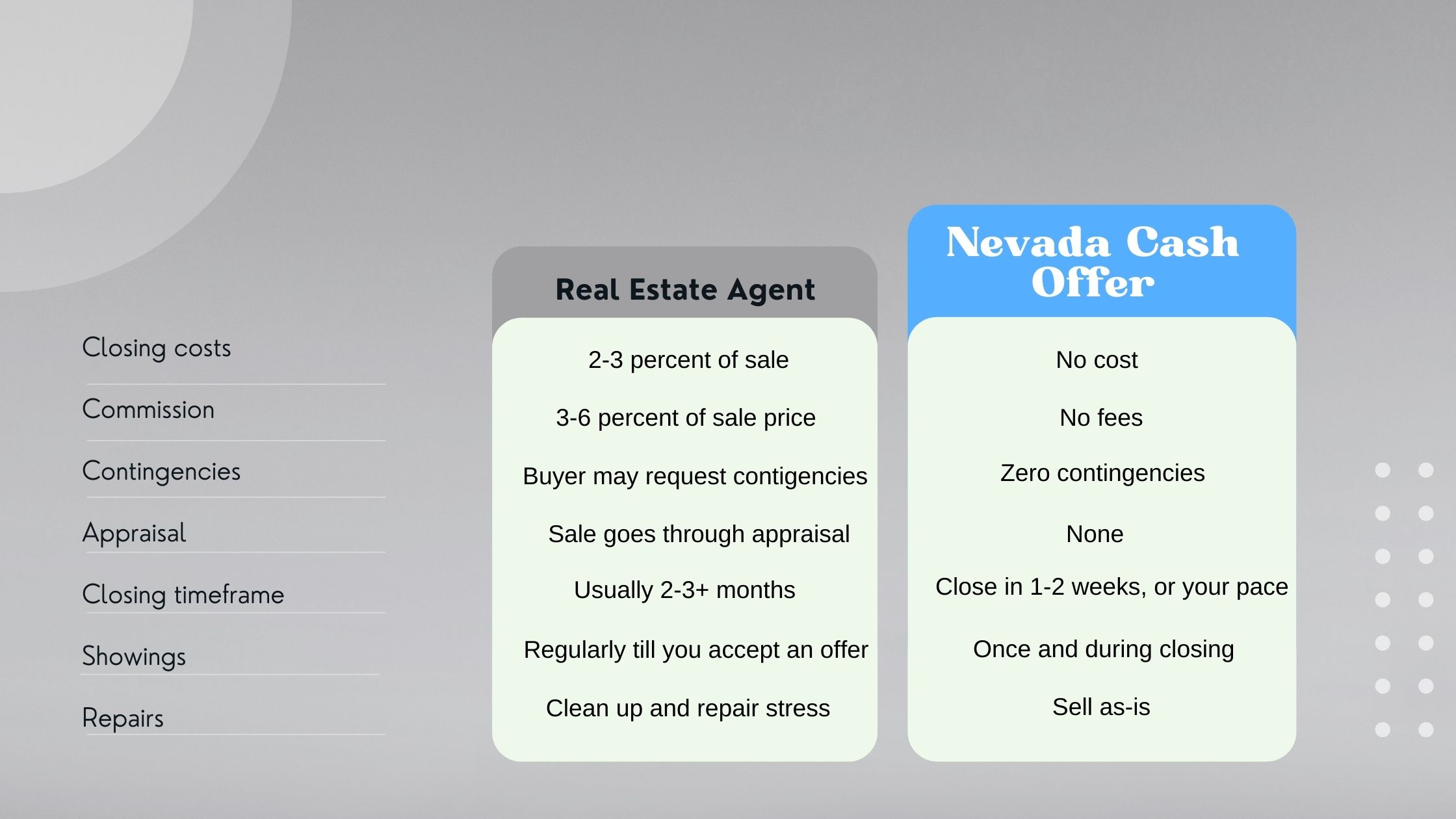 We buy houses with cash and lightning speed compared to a traditional sale with an agent.

Our offer may reach you as soon as the day you contact us or two. However, with an agent, it may take 1-2 months and multiple showings (open houses) to receive an offer you like.

Meanwhile, your house must be move-in-condition and in a seller’s market for an agent to sell your house for top dollar on the MLS. But with Nevada Cash Offer, you can sell your house as-is, without contingencies or appraisals, and at any time.

Due to our fast closing policy, we understand you might be unready to move so fast. So we can work with you on a preferable date. But if a financed buyer wants you booted out after a week, you either take it or leave it.

But you don’t need to rush with Nevada Cash Offer. We will complete the sale at your convenience. No fees. And no commission.

However, it’s up to you to provide necessary title documents promptly when the title company requests them. It’s the only way we can buy your house as fast as we’ve proposed.

How We Buy Spring Valley Houses Without Commission or Fees

We are property investors, not agents or wholesale brokerage.

Essentially, we don’t try to make money directly off the sale of your house by charging a commission or selling your contract to the highest bidder before closing.

Instead, we buy your house in Spring Valley and transform it into a move-in-ready home for resale or rent.

We adjust for the cost of repairs in our cash offer and a small percentage for profit. But we guarantee a fast sale, and that you’ll receive a reasonable offer.

At the end of the day, it’s a win-win transaction.

Did you know it takes between 30 and 90 days to sell a move-in-ready house in Spring Valley? And this doesn’t include cleaning up, fixing damages, and staging the home.

With Nevada Cash Offer, you can sell your Spring Valley house within 7-14 days. You don’t need to repair structural damages or even take out the trash. We buy all types of houses quickly, which is unheard of in real estate.

We not only buy your house fast but pay 100% cash. 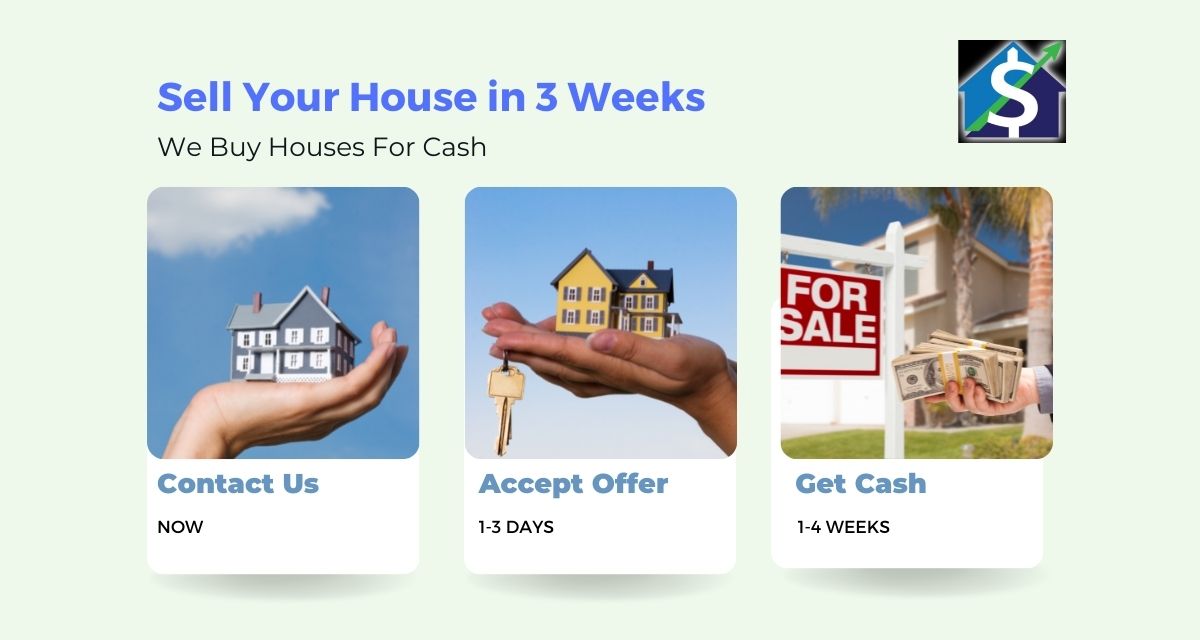 We are solution providers who help homeowners in any situation with a proven 3-step method. our

If the transaction carries on without delay during the transfer of title documents, you can sell as fast as 7 days.

Spring Valley has a rich and exciting history. First, it’s an incorporated town and census-designated place.

The story behind its creation is just as impressive as Paradise — another CDP in Nevada. So here it is.

It all began in the 60s when the Parvin-Dohrmann corporation bought the Stardust Resorts and Casinos. With no use for Stardust’s International Raceway track, the corporation leased it out until 1970, when Pardee Homes acquired the land.

As developers, they came up with a master plan to build a Spring Valley housing community. They drew inspiration for the name from the mountain views and its locals.

Fast forward to 1981, Spring Valley residents lobbied the Clark County Commission to create an unincorporated town. And they did in May of that year.

The small community started out as a 1 square mile landmass, but today it’s about 33 square miles — all land.

Spring Valley is bordered on the north by Sahara Avenue, Warm Spring Road to the south, Hualapai Way to the West, and Decatur Boulevard to the East.

Most of the area consists of housing subdivisions and strip malls. They are boulevards that link residential Las Vegas to the happening Strip in Paradise.

The famous Las Vegas strip is only 30 minutes drive away from Spring Valley. Take a day or two to enjoy the scene of the brightest spot on earth!

Enjoy scenic rides on the High Roller Observation Wheel and Skypod thrill rides. Then, tour the city on a double-decker bus or go in style with a helicopter tour.

Not to mention spending a night at luxury Hotels and Casinos like the Egyptian-themed Luxor Hotel or catching a glimpse of Bellagio’s Talking Fountains.

Spring Valley, like Vegas, is a desert. So while you’re here, you can make the best of your surroundings.

Brave the Nevada desert while riding on a dune buggy going over 10 miles across the sea of sand.

Take-off begins in Las Vegas, and the ride could last 30 or more minutes of wild fun.

Take time off to relax and rejuvenate in a serene environment. The Desert Breeze Park is one of the largest in the Clark County park system. It’s equipped with outdoor and basketball courts, soccer fields, baseball fields, pavilions, and a large lap indoor pool.

We Service All of Spring Valley

If you want to sell a house fast in Spring Valley, we are your most reliable cash buyers.

Are you ready to sell your Spring Valley house for cash?

Fill out the contact form or give us a call to arrange your free cash offer. We’ll get back in touch soon if you send a mail or have an actual person receive your call during business hours.

That’s totally understandable. Call us today for a free consultation to discuss your sales options.